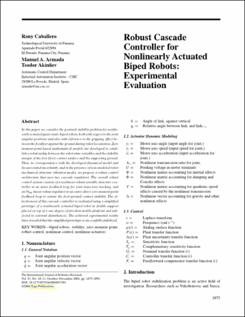 In this paper we consider the postural stability problem for nonlinearly actuated quasi-static biped robots, both with respect to the joint angular positions and also with reference to the gripping effect between the foot/feet against the ground during robot locomotion. Zero moment point based mathematical models are developed to establish a relationship between the robot state variables and the stability margin of the foot (feet) contact surface and the supporting ground. Then, in correspondence with the developed dynamical model and its associated uncertainty, and in the presence of non-modeled robot mechanical structure vibration modes, we propose a robust control architecture that uses two cascade regulators. The overall robust control system consists of a nonlinear robust variable structure controller in an inner feedback loop for joint trajectory tracking, and anH∞ linear robust regulator in an outer, direct zero moment point feedback loop to ensure the foot-ground contact stability. The effectiveness of this cascade controller is evaluated using a simplified prototype of a nonlinearly actuated biped robot in double support placed on top of a one-degree-of-freedom mobile platform and subjected to external disturbances. The achieved experimental results have revealed that the simplified prototype is successfully stabilized.