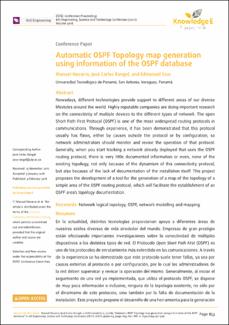 Nowadays, different technologies provide support to different areas of our diverse lifestyles around the world. Highly reputable companies are doing important research on the connectivity of multiple devices to the different types of network. The open Short Path First Protocol (OSPF) is one of the most widespread routing protocols in communications. Through experience, it has been demonstrated that this protocol usually has flaws, either by causes outside the protocol or by configuration, so network administrators should monitor and revise the operation of that protocol. Generally, when you start tracking a network already deployed that uses the OSPF routing protocol, there is very little documented information or even, none of the existing topology, not only because of the dynamism of this connectivity protocol, but also because of the lack of documentation of the installation itself. This project proposes the development of a tool for the generation of a map of the topology of a simple area of the OSPF routing protocol, which will facilitate the establishment of an OSPF area's topology documentation.