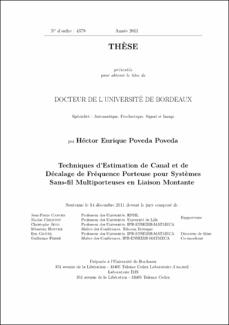 Multicarrier modulation is the common feature of high-data rate mobile wireless systems. In that case, two phenomena disturb the symbol detection. Firstly, due to the relative transmitter-receiver motion and a difference between the local oscillator (LO) frequency at the transmitter and the receiver, a carrier frequency offset (CFO) affects the received signal. This leads to an intercarrier interference (ICI). Secondly, several versions of the transmitted signal are received due to the wireless propagation channel. These unwanted phenomena must be taken into account when designing a receiver. As estimating the multipath channel and the CFO is essential, this PhD deals with several CFO and channel estimation methods based on optimal filtering. Firstly, as the estimation issue is nonlinear, we suggest using the extended Kalman filter (EKF). It is based on a local linearization of the equations around the last state estimate. However, this approach requires a linearization based on calculations of Jacobians and Hessians matrices and may not be a sufficient description of the nonlinearity. For these reasons, we can consider the sigma-point Kalman filter (SPKF), namely the unscented Kalman Filter (UKF) and the central difference Kalman filter (CDKF).

The UKF is based on the unscented transformation whereas the CDKF is based on the second order Sterling polynomial interpolation formula. Nevertheless, the above methods require an exact and accurate a priori system model as well as perfect knowledge of the additive measurementnoise statistics. Therefore, we propose to use the H∞ filtering, which is known to be more robust to uncertainties than Kalman filtering. As the state-space representation of the system is non-linear, we first evaluate the “extended H∞ filter”, which is based on a linearization of the state-space equations like the EKF. As an alternative, the “unscented H∞ filter”, which has been recently proposed in the literature, is implemented by embedding the unscented transformation into the “extended H∞ filter” and carrying out the filtering by using the statistical linear error propagation approach.