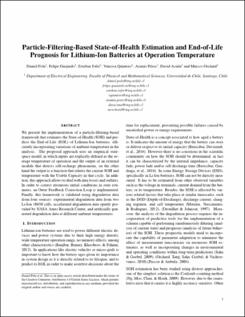 We present the implementation of a particle-filtering-based framework that estimates the State-of-Health (SOH) and predicts the End-of-Life (EOL) of Lithium-Ion batteries, efficiently incorporating variations of ambient temperature in the analysis. The proposed approach uses an empirical state-space model, in which inputs are explicitly defined as the average temperature of operation and the output of an external module that detects self-recharge phenomena, on the other hand the output is a function that relates the current SOH and temperature with the Usable Capacity in that cycle. In addition, this approach allows to deal with data losses and outliers. In order to correct erroneous initial conditions in state estimates, an Outer Feedback Correction Loop is implemented. Finally, this framework is validated using degradation data from four sources: experimental degradation data from two Li-Ion 18650 cells, accelerated degradation data openly provided by NASA Ames Research Center, and artificially generated degradation data at different ambient temperatures.