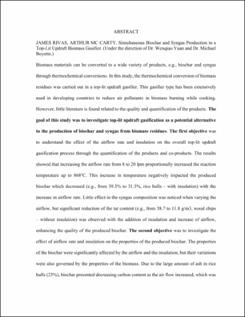 Biomass materials can be converted to a wide variety of products, e.g., biochar and syngas through thermochemical conversions. In this study, the thermochemical conversion of biomass residues was carried out in a top-lit updraft gasifier. This gasifier type has been extensively used in developing countries to reduce air pollutants in biomass burning while cooking. However, little literature is found related to the quality and quantification of the products. The goal of this study was to investigate top-lit updraft gasification as a potential alternative to the production of biochar and syngas from biomass residues.

The first objective was to understand the effect of the airflow rate and insulation on the overall top-lit updraft gasification process through the quantification of the products and co-products. The results showed that increasing the airflow rate from 8 to 20 lpm proportionally increased the reaction temperature up to 868oC. This increase in temperature negatively impacted the produced biochar which decreased (e.g., from 39.3% to 31.3%, rice hulls – with insulation) with the increase in airflow rate. Little effect in the syngas composition was noticed when varying the airflow, but significant reduction of the tar content (e.g., from 58.7 to 11.8 g/m3, wood chips – without insulation) was observed with the addition of insulation and increase of airflow, enhancing the quality of the produced biochar.

The second objective was to investigate the effect of airflow rate and insulation on the properties of the produced biochar. The properties of the biochar were significantly affected by the airflow and the insulation, but their variations were also governed by the properties of the biomass. Due to the large amount of ash in rice hulls (23%), biochar presented decreasing carbon content as the air flow increased, which was opposite to wood chips biochar because of the low ash content in the untreated wood chips (0.57%). In addition, the BET surface area of the biochar increased up to 332 m2 /g when increasing the airflow, but it further increased to 405 m2 /g with the addition of insulation.