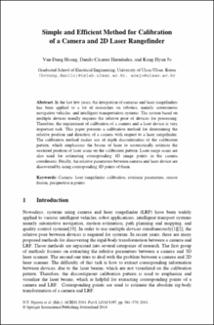 Simple and Efficient Method for Calibration of a Camera and 2D Laser Rangefinder.pdf (436.1Kb)

In the last few years, the integration of cameras and laser rangefinders has been applied to a lot of researches on robotics, namely autonomous navigation vehicles, and intelligent transportation systems. The system based on multiple devices usually requires the relative pose of devices for processing. Therefore, the requirement of calibration of a camera and a laser device is very important task. This paper presents a calibration method for determining the relative position and direction of a camera with respect to a laser rangefinder. The calibration method makes use of depth discontinuities of the calibration pattern, which emphasizes the beams of laser to automatically estimate the occurred position of laser scans on the calibration pattern. Laser range scans are also used for estimating corresponding 3D image points in the camera coordinates. Finally, the relative parameters between camera and laser device are discovered by using corresponding 3D points of them.