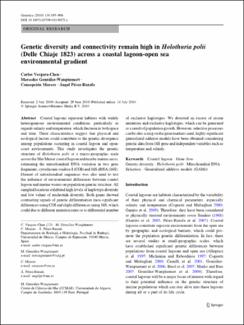 Coastal lagoons represent habitats with widely heterogeneous environmental conditions, particularly as regards salinity and temperature, which fluctuate in both space and time. These characteristics suggest that physical and ecological factors could contribute to the genetic divergence among populations occurring in coastal lagoon and open-coast environments. This study investigates the genetic structure of Holothuria polii at a micro-geographic scale across the Mar Menor coastal lagoon and nearby marine areas, estimating the mitochondrial DNA variation in two gene fragments, cytochrome oxidase I (COI) and 16S rRNA (16S). Dataset of mitochondrial sequences was also used to test the influence of environmental differences between coastal lagoon and marine waters on population genetic structure. All sampled locations exhibited high levels of haplotype diversity and low values of nucleotide diversity. Both genes showed contrasting signals of genetic differentiation (non-significant differences using COI and slight differences using 16S, which could due to different mutation rates or to differential number of exclusive haplotypes. We detected an excess of recent mutations and exclusive haplotypes, which can be generated as a result of population growth. However, selective processes can be also acting on the gene markers used; highly significant generalized additive models have been obtained considering genetic data from 16S gene and independent variables such as temperature and salinity.