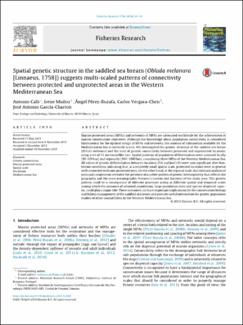 Marine protected areas (MPAs) and networks of MPAs are advocated worldwide for the achievement of marine conservation objectives. Although the knowledge about population connectivity is considered fundamental for the optimal design of MPAs and networks, the amount of information available for the Mediterranean Sea is currently scarce. We investigated the genetic structure of the saddled sea bream (Oblada melanura) and the level of genetic connectivity between protected and unprotected locations, using a set of 11 microsatellite loci. Spatial patterns of population differentiation were assessed locally (50–100 km) and regionally (500–1000 km), considering three MPAs of the Western Mediterranean Sea. All values of genetic differentiation between locations (Fst and Jost’s D) were non-significant after Bonferroni correction, indicating that, at a relatively small spatial scale, protected locations were in general well connected with non-protected ones. On the other hand, at the regional scale, discriminant analysis of principal components revealed the presence of a subtle pattern of genetic heterogeneity that reflects the geography and the main oceanographic features (currents and barriers) of the study area. This genetic pattern could be a consequence of different processes acting at different spatial and temporal scales among which the presence of admixed populations, large population sizes and species dispersal capacity, could play a major role. These outcomes can have important implications for the conservation biology and fishery management of the saddled sea bream and provide useful information for genetic population studies of other coastal fishes in the Western Mediterranean Sea.