Connectivity between coastal lagoons and sea: Asymmetrical effects on assemblages' and populations' structure 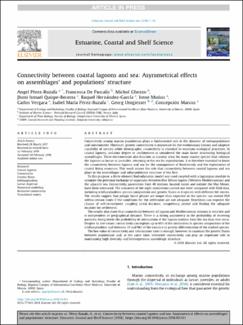 Connectivity among marine populations plays a fundamental role in the dynamic of metapopulations and communities. Moreover, genetic connectivity is important for the evolutionary history and adaptive capability of species while demographic connectivity is essential to maintain ecological processes. In coastal lagoons, isolation degree or confinement is considered the main factor structuring biological assemblages. These environments also function as nursery areas for many marine species that colonize the lagoons as larvae or juveniles, returning to the sea for reproduction. It is therefore essential to know the connectivity between lagoons and sea for the management of biodiversity and the exploitation of coastal living resources. This work anases the role that connectivity between coastal lagoons and sea plays in the assemblages and subpopulations structure of the first.

To this purpose, a finite element hydrodynamic model was used coupled with a lagrangian module to simulate the potential exchange of organisms between Mar Menor lagoon (Western Mediterranean) and the adjacent sea. Connectivity parameters from 40 stations, located inside and outside the Mar Menor, have been estimated. The outcomes of the eight simulations carried out were compared with field data, including ichthyoplankton species composition and genetic fluxes in 6 species with different life stories. The results suggest that pelagic larval phases are longer than expected or the species can extend PLD within certain limits if the conditions for the settlement are not adequate. Repetition can improve the chance of self-recruitment, coupling larval duration, competency period and finding the adequate location for settlement.

The results also show that connectivity between all lagoon and Mediterranean stations is very low and is independent of geographical distance. There is a strong asymmetry in the probability of receiving particles, being lower the probability of colonization of the lagoon stations from the sea than vice versa. Despite its low values, connectivity can explain up to 65% of the similarities in species composition of the ichthyoplankton and between 30 and 96% of the variance in genetic differentiation of the studied species.

The low value of connectivity and colonization rates is enough, however, to maintain the genetic fluxes between populations and, at the same time, restricted connectivity can play an important role in maintaining high diversity and heterogeneous assemblage structure.