New insights into the properties of pubescent surfaces: the peach fruit (prunus persica batsch) as a model 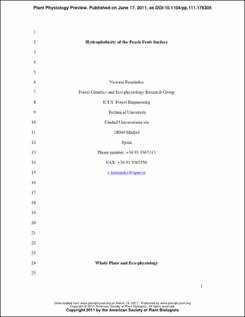 The surface of peach (Prunus persica ‘Calrico’) is covered by a dense indumentum, which may serve various protective purposes. With the aim of relating structure to function, the chemical composition, morphology, and hydrophobicity of the peach skin was assessed as a model for a pubescent plant surface. Distinct physicochemical features were observed for trichomes versus isolated cuticles. Peach cuticles were composed of 53% cutan, 27% waxes, 23% cutin, and 1% hydroxycinnamic acid derivatives (mainly ferulic and p-coumaric acids). Trichomes were covered by a thin cuticular layer containing 15% waxes and 19% cutin and were filled by polysaccharide material (63%) containing hydroxycinnamic acid derivatives and flavonoids. The surface free energy, polarity, and work of adhesion of intact and shaved peach surfaces were calculated from contact angle measurements of water, glycerol, and diiodomethane. The removal of the trichomes from the surface increased polarity from 3.8% (intact surface) to 23.6% and decreased the total surface free energy chiefly due to a decrease on its nonpolar component. The extraction of waxes and the removal of trichomes led to higher fruit dehydration rates. However, trichomes were found to have a higher water sorption capacity as compared with isolated cuticles. The results show that the peach surface is composed of two different materials that establish a polarity gradient: the trichome network, which has a higher surface free energy and a higher dispersive component, and the cuticle underneath, which has a lower surface free energy and higher surface polarity. The significance of the data concerning water-plant surface interactions is discussed within a physiological context.