How was the Hubble sequence 6 Gyrs ago? 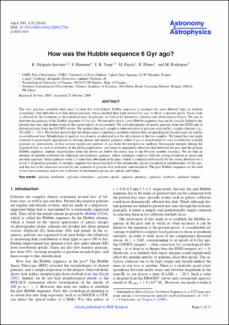 The way galaxies assemble their mass to form the well-defined Hubble sequence is amongst the most debated topic in modern cosmology. One difficulty is to link distant galaxies, which emitted their light several Gyr ago, to those at present epoch. Such a link is affected by the evolution or the transformation of galaxies, as well as by numerous selection and observational biases. We aim to describe the galaxies of the Hubble sequence, 6 Gyr ago. We intend to derive a past Hubble sequence that can be causally linked to the present-day one, and further estimate the uncertainties of that method. We selected samples of nearby galaxies from the SDSS and of distant galaxies from the GOODS survey. We verified that each sample is representative of galaxies selected by a single criterion, e.g., MJ (AB) < −20.3. We further showed that the observational conditions needed to retrieve their morphological classification are similar in an unbiased way. Morphological analysis was done in an identical way for all galaxies in the two samples. We found that our single criterion is particularly appropriate to relating distant and nearby galaxies, either if gas is transformed to stars in relatively isolated galaxies or, alternatively, if they accrete significant amounts of gas from the intergalactic medium. Subsequent mergers during the elapsed 6 Gyr, as well as evolution of the stellar populations, are found to marginally affect the link between the past and the present Hubble sequence. Indeed, uncertainties from the above are below the errors due to the Poisson number statistics. We do find an absence of number evolution for elliptical and lenticular galaxies, which strikingly contrasts with the strong evolution of spiral and peculiar galaxies. Spiral galaxies were 2.3 times less abundant in the past, which is compensated exactly by the strong decrease by a factor 5 of peculiar galaxies. It strongly suggests that more than half of the present-day spirals had peculiar morphologies, 6 Gyr ago, and this has to be taken into account by any scenario of galactic disk evolution and formation. The past Hubble sequence can be used to test these scenarios and to test evolution of fundamental planes for spirals and bulges.