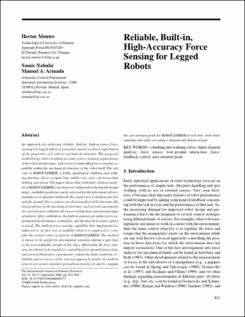 An approach for achieving reliable, built-in, high-accuracy force sensing for legged robots is presented, based on direct exploitation of the properties of a robot’s mechanical structure. The proposed methodology relies on taking account of force-sensing requirements at the robot design stage, with a view to embedding force-sensing capability within the mechanical structure of the robot itself. The test case is ROBOCLIMBER, a bulky, quadruped climbing and walking machine whose weighty legs enable it to carry out heavy-duty drilling operations. The paper shows that, with finite-element analysis of ROBOCLIMBER’s mechanical configuration during the design stage, candidate positions can be selected for the placement of force transducers to measure indirectly the contact forces between the feet and the ground. Force sensors are then installed at the theoretically best positions on the mechanical structure, and several experiments are carried out to calibrate all sensors within their operational range of interest. After calibration, the built-in sensors are subjected to experimental performance evaluation, and the final best sensor option is found. The built-in force-sensing capability thus implemented is subjected to its first test of usability when it is employed to compute the actual centre of gravity of ROBOCLIMBER. The method is shown to be useful for determining variation during a gait (due to the non-negligible weight of the legs). Afterwards the force sensors are shown to be useful for controlling foot-ground interaction, and several illustrative experiments confirm the high sensitivity, reliability and accuracy of the selected approach. Lastly, the built-in sensors are used to measure ground-reaction forces and to compute the zero-moment point for ROBOCLIMBER in real time, both while standing and while executing a dynamically balanced gait.